A new study from researchers in the Humphrey School of Public Affairs found that transitway investment adds considerable economic value to metropolitan regions, including the Twin Cities area, and it increases access to the places people need to reach to prepare for, get, and keep a good job.

The new study had two components:

Transitway investment does not, however, measurably change a region’s median household income or income inequality. “While a whole region may see growth from transitway investment, we found no direct impact on how income is distributed,” Fan says. 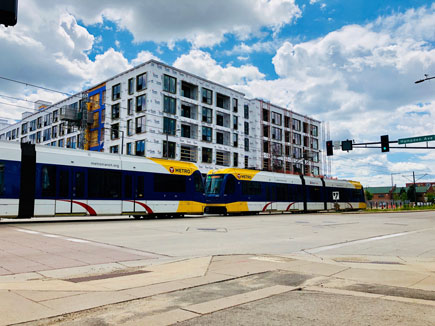 The comparative analysis looked at access—not economic effects—at a finer regional scale. The team found that more extensive fixed-guideway transit systems (such as those in the Twin Cities and Denver) not only increase access overall to employment, education, and workforce development opportunities, they also provide more equitable access for people of color and residents of areas with concentrated poverty.

As part of this analysis, the researchers compared the access provided by four potential Twin Cities transitway scenarios: a full build-out of the regional transitway system and three partial build-out scenarios. All four scenarios produced very similar results, they say, likely because all of them involve most of the proposed future system.

“We found that overall accessibility gains, including those for whites, are modest,” says Andrew Guthrie, assistant professor with the University of Memphis and a project co-investigator. “The greatest gains go to people of color. Access rates increase between 10 and 15 percent for African Americans and Hispanics. Residents in areas of concentrated poverty see greater gains as well.”

The researchers note that accessibility gains for low-income minorities do not necessarily translate to economic gains for these communities, and that low-income minority neighborhoods are often at risk for gentrification. Without proper planning, investment in these areas may not benefit disadvantaged population groups.

“As regions continue their investments, they should understand that transitway development could displace low-income residents,” Fan says. “A rising tide may not necessarily lift all boats—or reduce the gap between rowboats and yachts.”

“In transit, and especially transit-oriented development (TOD), we strive to increase economic growth and reduce economic disparity,” says Lucy Galbraith, TOD director with Metro Transit. “This research shows success in regional growth and challenges us all to do better in helping disadvantaged communities.”

Others on the research team were research assistants Noah Wexler, Leoma Van Dort, and Yuxuan Guo of the Humphrey School. The study was sponsored by the Transitway Impacts Research Program.