Southwest Minnesota has the highest average wind speeds in the state—bad news for MnDOT snowplow operators who often drive in low-visibility conditions to clear roads.

“We have more days when the wind blows than when it doesn’t,” says Chase Fester, District 7 transportation operations supervisor. “We struggle with the wind.”

That’s why District 7 is piloting a snowplow driver-assist system (DAS) developed by U of M researchers to combat the blowing snow and fog that often cause zero visibility. The DAS helps snowplow operators see road alignments and features such as turn lanes, guardrails, and road markings. Even in less extreme winter weather, snowplow operators gain assurance of their lane location using the system.

The DAS was developed and refined over the past 20 years under multiple research projects funded by MnDOT and the USDOT’s University Transportation Center program. Professor Max Donath, director of the U’s Roadway Safety Institute, led the work. In addition to plows, the DAS technology has also been tested in other specialty vehicles such as patrol cars and ambulances. Vehicles using the system have been deployed in both Minnesota and Alaska.

The DAS uses GPS technology and a front-mounted radar to provide an image of the road and any obstacles in front of the operator. The image is displayed on a monitor inside the cab of the plow. The system also vibrates the operator’s seat as a warning if the plow veers too close to the roadway’s centerline or fog line.

The vibrations continue until the driver moves back into the center of the lane. The driver can also turn off the warning feature to clear snow from the shoulder.

The DAS is currently installed in one truck in District 7. The $75,000 cost makes it difficult to install in every truck in the district or state, although Fester says having at least one system in every district may be possible.

Fester says the system proved its worth one day in February when blizzard conditions caused zero visibility and forced many road closures in southwest Minnesota. He was called out at 2 a.m. February 8 to assist a stranded state trooper and several motorists on a 12-mile stretch of Highway 60 between Windom and Heron Lake. Fester drove a pickup behind the DAS-equipped snowplow, driven by Darryl Oeltjenbruns, to reach them.

As the DAS identified other stranded vehicles on the way to Heron Lake, Fester and Oeltjenbruns checked to make sure they weren’t occupied with people. Once they made it to Heron Lake, they stopped at the community center where they had earlier dropped off the stranded motorists.

“When we first went out, there were about six stranded vehicles. Coming back from Heron Lake, there were about 15,” Fester says. “At one time, we had 12 vehicles in line as we drove back to Windom, driving about 10 to 15 miles per hour.”

Later that morning the DAS system was used again to locate other motorists.

“We continued to use it until about 10 a.m. or 11 a.m. that day,” Fester says. “The system worked great and kept everyone safe. It was an interesting morning.”

(Reprinted and adapted with permission from an article by Sue Roe in MnDOT’s Feb. 17, 2016, Newsline.)

Computing COVID-19: How location data could help track and control the spread 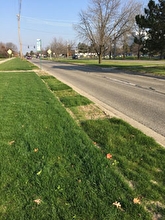