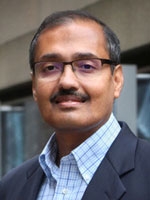 Rajamani received his M.S. and Ph.D. degrees from the University of California at Berkeley in 1991 and 1993, respectively, and his B.Tech degree from the Indian Institute of Technology at Madras in 1989. Rajamani has co-authored more than 100 journal papers and is a co-inventor on eight patent applications. Rajamani is a Fellow of ASME and has served as chair of the IEEE Technical Committee on Automotive Control. He has also served on the editorial boards of the IEEE Transactions on Control Systems Technology and the IEEE/ASME Transactions on Mechatronics. Rajamani has been a recipient of the CAREER award from the National Science Foundation, the 2001 Outstanding Paper award from the journal IEEE Transactions on Control Systems Technology, the Ralph Teetor Award from SAE, and the 2007 O. Hugo Schuck Award from the American Automatic Control Council.