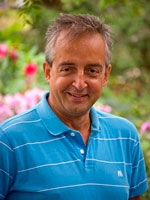 612-625-0163
npapas@cs.umn.edu
Nikolaos Papanikolopoulos's research interests include robotics, sensors for transportation applications, computer vision, and control systems. As the director of the Center for Distributed Robotics and a faculty member of the Artificial Intelligence and Robotic Vision Laboratory, his transportation research has included projects involving vision-based sensing and classification of vehicles, and the recognition of human activity patterns in public areas and while driving.