Each year the Ray L. Lappegaard Distinguished Service Award is presented to a transportation professional who displays outstanding leadership, mentorship and support to the profession. The award is named in honor of Ray L. Lappegaard, chair of the CTS Executive Committee from its creation in 1989 until his death in April 1993. Lappegaard held numerous high-level positions in state government and the private sector, and was a mentor to many in the transportation field. 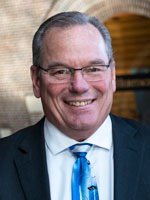 This year’s recipient, Bernie Arseneau, serves as HDR’s Highways and Roads director. Prior to joining HDR, Arseneau spent 30 years at MnDOT, most recently serving as deputy commissioner and chief engineer. While state traffic engineer from 2003 to 2008, Arseneau led the traffic safety paradigm shift in Minnesota from the traditional reactive approach to the proactive and systematic Toward Zero Deaths approach we have today.