The Richard P. Braun Distinguished Service Award is presented annually to a transportation professional for outstanding leadership in research and innovation. It is named after founding CTS director Richard Braun for his leadership and contribution to research, and as a champion of transportation innovation. 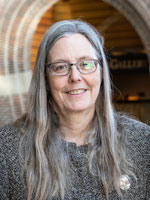 This year’s recipient is Carol Shield, a College of Science and Engineering Distinguished Professor in the Department of Civil, Environmental and Geo- Engineering at the University of Minnesota. Shield has been involved with more than 30 transportation-related research projects funded by MnDOT, NSF, NCHRP, and the Army Corp of Engineers. Her primary research areas are the use of fiber-reinforced polymers in infrastructure and the behavior of prestressed concrete girders. She was the director of the University’s MAST Laboratory from 2004–2015.