Is the Future the Past, with a Technology Twist?

Do an internet search of “future transportation” and you’re likely to see results about driverless cars, delivery drones, maglev trains, hyperloop, and flying taxis. An image search shows many pod-like vehicles, usually silver with opaque windows, often running on elevated tracks or flying. You see very few, if any, people.

In some ways it’s much easier to plan for a future if we ignore the human element. But doing so also ignores the role a truly multimodal transportation system can have in promoting health and well-being, resiliency, and equity. Focusing only on electrifying our cars and trucks ignores how these vehicles will still contribute to congestion and safety risks. Connected and autonomous vehicles could help address congestion and safety, but when those benefits will be realized is less clear. These vehicles do not contribute significantly to enhancing most people’s health (aside from reduced emissions), well-being, or connections to community.

What will it take to ensure that active transportation, enhanced by technology, reaches its potential? ...imagine a future where instead of measuring the performance of an intersection based on motor vehicle congestion, we measure it based on its level of physical activity. 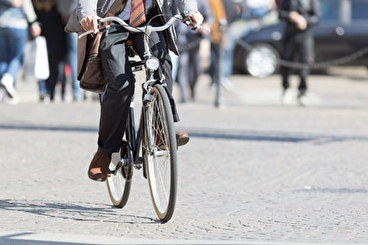 Our future transportation system needs to also focus on some of the lowest-tech modes—walking, bicycling, and rolling (e.g., in a wheelchair)—but with a modern, high-tech twist.

What are the problems these “old” modes can help solve? Some are obvious—the lack of tailpipe emissions makes our air cleaner to breathe and combats climate change. Increasing physical activity through walking and cycling for everyday transportation may be more effective than efforts to get people to go to the gym. It’s also more affordable. About half of adults and over three-quarters of high school students nationally do not get enough physical activity. The physical health benefits of the activity of walking or cycling are well-documented. And, that may not require biking 10 miles to work every day. A recent study estimated that if adults (age 40+) were at least moderately active for an additional 10 minutes per day, we could avert nearly 7 percent of annual deaths. Some of the health benefits may not be so obvious. For example, bicycling has been shown to improve motor functions in people with Parkinson’s disease.

Much has been written lately about mental health, and many experts state that we are undergoing an “epidemic of loneliness,” with perhaps over half of all US adults considered lonely. Loneliness affects not only our psychological well-being, but also our physical health. People experiencing loneliness or social isolation are at higher risk of dying early. Many studies have found that walking and bicycling, particularly for commuting, are associated with lower stress and greater well-being compared to driving. A large research study in Europe found that bicycling was associated with better mental health, lower stress, and lower levels of loneliness, and that walking was associated with higher rates of having contact with family or friends at least weekly. Professor Yingling Fan’s research is demonstrating these benefits in the Twin Cities, showing where people are happier when traversing the region.

Why would walking and cycling help our mental health? Researcher Avigail Ferdman provided a “new perspective” on this. Reviewing dozens of studies, Ferdman explains that the pace of walking and bicycling allows us to better process what we are seeing and experiencing; we can digest more complex information and make new connections. This can spur the incubation phase of the creative process, allowing the mind to relax and unconsciously work on a problem. With both modes, we are also in the public realm, which provides an opportunity to develop our social capacities and sense of community. The process of negotiating shared use of space, such as on a sidewalk, can enhance trust in social interactions and help us develop non-verbal communication skills.

Walking and bicycling can also help our local economies. A national study of six cities, along with a follow-up study in Portland, found that when cities retrofitted streets in commercial areas to be more bicycle- and pedestrian-friendly, it often resulted in positive economic benefits, such as higher sales and/or employment in the retail and food sectors; negative effects were rare. These walkable commercial districts incorporate many of the same elements as the town centers and streetcar suburbs from over a century ago. In addition to economic resiliency, bicycles may play a role in some types of disaster recovery.

What do we need to do to realize these benefits? The research has some pretty clear answers. Build dense and connected networks in which people of all ages and abilities feel safe. What do those networks look like? For people on bicycles, they include separated multiuse trails, protected bike lanes (on-street lanes separated from motor vehicles by parked cars, planters, and other physical barriers), and bicycle boulevards (low-traffic streets with traffic calming features that slow down and divert motor vehicles). For pedestrians and people using mobility devices such as wheelchairs, accessible sidewalks are key.

For all active transportation users, busy intersections need to offer safe ways to cross, through crosswalks, bike boxes, rectangular rapid-flash beacons, and other traffic-control devices that have known safety and user benefits. Reducing the speed of motor vehicle traffic is also key to reducing fatalities and injuries and making networks more comfortable for people. We can facilitate longer-distance travel by making connections to transit easier through secure station-area parking and space on transit vehicles for bicycles and scooters. Some larger, structural changes will make the networks more effective, such as land-use planning and zoning that shortens trip distances and reduces car parking, building codes that provide adequate bicycle parking, and tax codes that prioritize these cleaner and healthier modes of travel over driving alone in private cars.

We also need to use technology to make active transportation work even better for people in the future. Electric-assist bicycles (e-bikes) could play a big role, along with cargo e-bikes, e-scooters, adaptive cycles for people with disabilities, and other small, low-powered electric vehicles. E-bikes help overcome some of the key barriers to bicycling—hills and trip distances. We need to design future protected bike lanes to accommodate this mix of vehicles—and likely call them something other than “bike lanes.” The Society of Automotive Engineers (SAE) developed a taxonomy and classification system for these vehicles that will enable us to design and regulate the use of such infrastructure. As Tom Fisher points out, a future with more automated vehicles may free up road space for such lanes. And yes, there are still health benefits from riding an e-bike. Recognizing these benefits, an increasing number of jurisdictions are offering e-bike purchase incentives, some of which favor lower-income residents.

Mobile technology has also fostered the growth of bike share and e-scooter share systems, also known as micromobility. These systems, particularly when integrated with transit, enable people to be multimodal (by riding or scooting to the train station) and provide flexibility (e.g., ride one way, but take the bus back if it’s raining). A 10-minute bike share ride to the train station, or to run an errand during a lunch break instead of driving, could be the extra minutes that help save thousands of lives annually. Over time, shared micromobility could reduce car ownership, especially when car sharing is also convenient. Being able to use one method to pay for all of these services would help. Even better: allow people to transfer for free between bike share and transit. This would be particularly helpful for lower-income people.

Another key role for technology is to ensure that autonomous vehicles accurately detect and safely react to the full range of active transportation users. In the future, we’ll have better systems that use LIDAR, mmWave radar, and other technologies to detect people on foot and bicycle at an intersection and change the traffic signals to provide them priority and reduce conflicts with motor vehicles. In the meantime, we can use today’s traffic signal technology to give pedestrians a head start to cross the street and bicyclists a separate signal to avoid conflicts with turning cars.

What will it take to ensure that active transportation, enhanced by technology, reaches its potential? Funding, of course, is always important. But fundamentally we need to change priorities and how we make decisions. Having good data is key to better decision making. We know how many vehicles traverse our highways and how many people use our transit systems, but with very few exceptions, we do not know how many people are walking or cycling in our cities. Minneapolis is one of the leading cities for collecting such data, but the result is still less data than we have for motor vehicles. Common technologies today work well for counting people on trails and bicycles in protected lanes. New sensor and data processing technology are finally making it possible to count people walking and cycling at busy intersections, streets, and sidewalks. As costs come down and accuracy and reliability are proven, cities could use the systems more extensively. Then imagine a future where instead of measuring the performance of an intersection based on motor vehicle congestion, we measure it based on its level of physical activity.

Read next:
United by Transportation >

Read previous:
< The Future of E-commerce