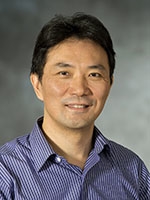 He has published more than 300 journal and conference/workshop papers, many of them in top venues in networking and related fields. Zhang is co-recipient of several best-papers awards, including from IEEE INFOCOM, ICNP and ACM SIGMETRICS. He has chaired the program committees of several major conferences in networking, including IEEE INFOCOM, IEEE ICNP, ACM SIGMETRICS, ACM CoNext, and ACM Internet Measurement Conference (IMC), and served on the editorial board of several journals such as IEEE/ACM Transactions on Networking, ACM ToMPECS, and PACM MACS. He is a fellow of IEEE.

Zhang received a PhD degree in computer science from the University of Massachusetts. He joined the faculty of the Department of Computer Science and Engineering at the University of Minnesota in 1997, where he is currently the McKnight Distinguished University Professor and Qwest Chair Professor in Telecommunications.