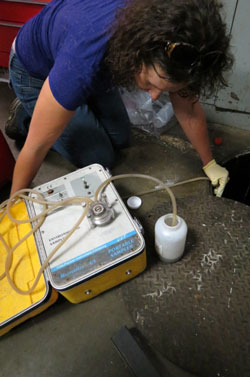 U of M researchers provided a comprehensive and practical evaluation of what the Minnesota Department of Transportation (MnDOT) would need to do to develop wastewater reuse systems for its truck stations and rest areas. Two MnDOT truck facilities will soon become more eco-friendly as a result of the findings.

“The great success of this project arises from its close examination and evaluation of all aspects of industrial wastewater reuse in Minnesota, from regulation to the practical choice of technology MnDOT will be able to sustain in the future,” says Sara Heger, a research engineer with the U’s Water Resources Center and the principal investigator.

The need for this MnDOT-funded project was surprising but real: despite Minnesota’s abundance of water resources, 75 percent of the state’s water comes from aquifers used at increasingly unsustainable rates. Recycling wastewater would allow potable groundwater aquifers to be used more conservatively. Minnesota’s state agencies have been directed by executive orders to make efforts to save energy and water; since every MnDOT building uses water, the agency saw potential for water reuse.

MnDOT realized that developing a system of water recycling could create sustainable water resources for toilet flushing and vehicle washing at its 50 rest areas and 137 truck-washing stations and storage facilities. “In addition, we were interested in exploring how salt-laden wastewater might be recaptured for further use in winter road maintenance,” Heger says.

“We found that wastewater reuse systems have been successfully implemented in Minnesota,” Heger says. “However, the regulatory framework for water reuse needs to be simplified and streamlined to create a more effective permitting process.”

Next, the researchers sampled and collected data from 11 MnDOT truck-washing facilities to identify common contaminants. They found excessive levels of only one chemical (ethylene dichloride, a solvent), which MnDOT could reduce its use of. Across all samples, the critical contaminants to be removed for water reuse were organics and suspended solids. Excessive chlorides were not considered a contaminant since chloride-rich water could be reused as brine in winter road maintenance operations.

Finally, researchers evaluated existing wastewater treatment technologies and determined which method would be most cost-effective. They recommend a membrane bioreactor as the most effective and economical system for MnDOT.

“This innovative study’s findings will result in the implementation of wastewater reuse technology at MnDOT,” says Neile Reider, an administrative engineer with MnDOT’s Office of Maintenance. “The project promises to be a continuing success.”

Based on the study’s findings, MnDOT is installing pilot implementations at the Granite Falls and Buffalo truck stations. “At these two sites the washdown water from washing plow trucks will be reused to make brine, thereby reusing the salt that otherwise would have been wasted and sent to a wastewater treatment plant,” Heger says.  Evaluation of the system’s treatment effectiveness and maintenance requirements will then be used to inform a broader-scale implementation of wastewater reuse systems for MnDOT.