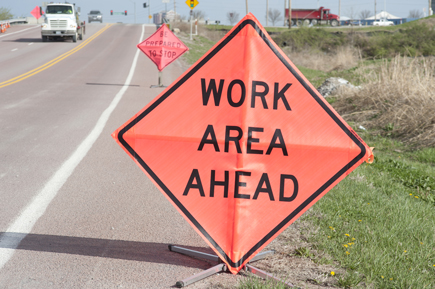 Work zones can be dangerous for both drivers and the work crew—but U of M researchers are working on innovative ways to lessen these risks and lower the rate of work-zone crashes. In a new study funded by the Minnesota Department of Transportation (MnDOT), researchers investigated the potential advantages and possible disadvantages of vehicle-to-infrastructure (V2I) in-vehicle messages to communicate to drivers.

“When we started this project, we saw a potential for drivers to become more aware and responsive to hazards within the work-zone by presenting the information directly to them through in-vehicle messaging technologies,” says Nichole Morris, director of the U’s HumanFIRST Laboratory, who led the project. “We also wanted to assess the extent to which this type of messaging could lead to driver distraction, as numerous studies have demonstrated the hazards of distracted driving, particularly from interacting with on-board technologies.”

The researchers began by identifying ideal design guidelines for any in-vehicle messaging system. Then, the team conducted a survey to uncover driver attitudes in Minnesota toward work-zone safety, smartphone use, and the potential for receiving messages through in-vehicle technologies such as smartphones.

“Our survey found that a significant number of drivers use their smartphone while driving—for navigation, talking, and even texting—and that they place them in a variety of locations throughout the vehicle, rarely in a mount,” says Morris. The survey revealed positive attitudes toward the use of a V2I work-zone messaging system but concern over its distraction potential. The researchers also found that many drivers distrust the accuracy of roadside signs for work zones and were receptive to using an electronic messaging system.

Following the survey, researchers designed the in-vehicle messages and conducted a simulated driving study to test the effectiveness of the system on driving safety. During the simulation, participants drove through two different types of work zones three times, each with different work-zone events and messaging interfaces. These included a portable roadside message sign, a smartphone presenting only audio messages, and a smartphone presenting audio-visual messages. The smartphones were either mounted on the dashboard or placed on the passenger seat to reflect real-world conditions.

“The main goal was to determine whether in-vehicle warnings conveyed through smartphones would be distracting to the driver. We found that wasn’t the case,” says Ken Johnson, work-zone, pavement marking, and traffic devices engineer at MnDOT.

Findings showed that there appeared to be no effect of distraction as long as in-vehicle messages were delivered in a controlled and driving-relevant manner. In fact, after analyzing the simulation data, researchers found that driving performance improved—drivers using either type of in-vehicle messaging performed better than they did with the roadside warning signs. Furthermore, drivers had better vehicle control and reported significantly less mental workload, better usability, and greater work-zone-event recall.

The study also found that placement of the messaging interface did not appear to be a significant factor for driving performance when the messages contained an audio component. Researchers hope to continue this work by field testing in-vehicle message systems and exploring possible avenues for broad implementation.