The bicycling industry in Minnesota—including manufacturing, wholesaling, retail sales, and non-profits and advocacy groups—produced an estimated total of $780 million of economic activity in 2014. This includes 5,519 jobs and $209 million in annual labor income (wages, salaries, and benefits) paid to Minnesota workers.

These findings are an important component of a multifaceted report from U of M researchers. Their research, funded by the Minnesota Department of Transportation (MnDOT), provides a comprehensive understanding of the economic impact and health effects of bicycling in Minnesota.

“This kind of bicycling study is definitely new for Minnesota but also new nationally,” says Sara Dunlap, principal planner in MnDOT’s Office of Transit. “This is the first time a state has attempted to assess, in a single study, the multiple impacts that bicycling activities have on the state’s economy and health.” 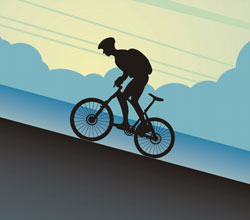 Xinyi Qian, an Assistant Extension Professor in the U’s Tourism Center, was the project’s principal investigator. For the bicycling industry portion of the work, the co-investigators were Neil Linscheid, Extension Educator, and Brigid Tuck, senior economic impact analyst, both with U of M Extension. 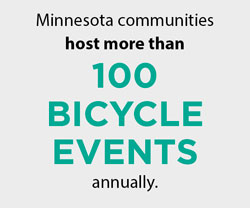 Through surveys and analysis, they found that an average bicycle event visitor in 2015 spent a total of $121 per day. This spending translates into an estimated total of $14 million of annual economic activity, which includes $5 million in annual labor income and 150 jobs. Event participants also brought additional people with them— more than 19,000 visitors who were travel companions but did not ride in any event.

The findings can help bring together event organizers and officials of various organizations—economic development, transportation, public health, and tourism—to promote the event facilities, the host communities, and bicycle tourism as a whole.

“Bicycling event attendees and their travel companions are a valuable audience for shopping, recreation, and amusement activities,” Qian says. “Communities hosting events could explore opportunities to capture additional spending from these important visitors.”

Qian notes that the analysis focused on event visitors and was not a broad measure of bicycle tourism.

An article in the February Catalyst discussed the health impacts component of the study; an article in the April issue will report on the magnitude of biking in the state.

Project launches to identify restrooms along bike paths in Minnesota