While some interns spend their days making copies and coffee runs, Caitlin Johnson spent her summer internship working on a research project exploring ways to improve safety in work zones.

Johnson, a fifth-year civil engineering student at the U of M Twin Cities (UMTC), is one of eight students from UMTC and the U of M Duluth who participated in this year’s Summer Transportation Internship Program.

Interns worked at the Minnesota Department of Transportation (MnDOT) for 10 weeks and gained valuable transportation-related experience in areas ranging from designing roadways to measuring pavement movement. The program, offered jointly by CTS and MnDOT, is now in its fourth year.

This year’s participants included the following students, working in these MnDOT offices:

Johnson, who worked in the Office of Traffic, Safety, and Technology, says her internship at MnDOT gave her the opportunity to study a topic that hasn’t been explored in-depth in the past and present those findings to industry professionals, including staff from the Federal Highway Administration.

“I’ve been finding things that people weren’t really expecting,” Johnson says. “And it might change the way that we go about making work zones safer.”

While Johnson worked primarily in the office, civil engineering student Luke Horsager spent much of his internship with the Bridge & Hydraulics Office outside, equipping MnDOT boats with new GPS and Bluetooth software used for river mapping and monitoring bridge scour. He says he enjoyed gaining hands-on experience with the technology.

“Learning how to operate and troubleshoot the new software has been really valuable,” Horsager says. “Gaining an understanding of this technology is going to be universally applicable later on.”

MnDOT engineer Nikki Bartlet supervised Horsager on the equipment setup project, but she says many of his duties were conducted independently.

“I think the biggest benefit [of the internship] for Luke is having to work and solve problems independently,” Bartlet says. “He’s done very well at that.”

Heidi Gray, a MnDOT Metro District designer, supervised intern Ellie Lee in the Office of Design. She worked with Lee on two design projects, including adding an auxiliary lane on I-94.

Gray says the internship program is valuable not only for the students, but also for the supervisors and MnDOT as a whole. While the interns gained important hands-on work experience and made valuable professional connections, MnDOT supervisors were introduced to talented young professionals, she says.

“It’s really good to get young people in here and teach them what MnDOT is all about,” she says. “I personally have enjoyed the opportunity to teach and pass along what I know. It’s a good refresher.” 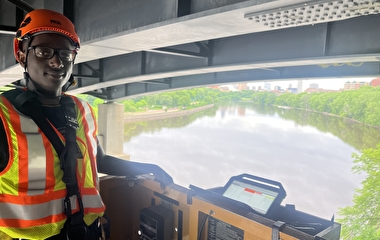 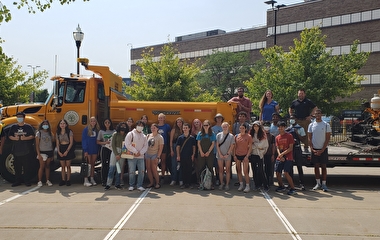 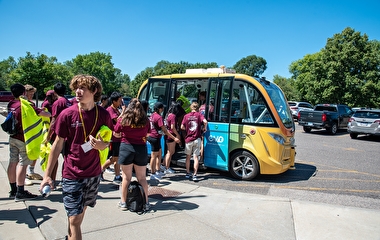