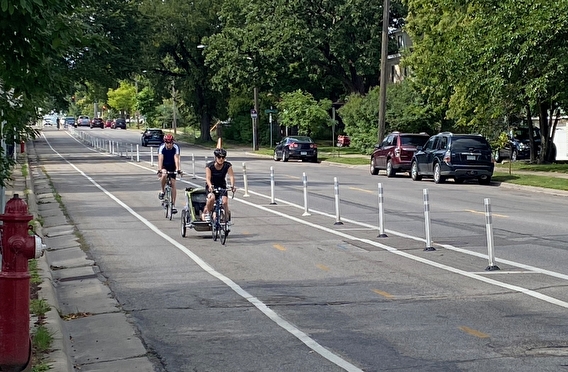 Many cities across the US are rapidly adding separated bike lanes (SBLs) to their transportation networks. The popularity of these specialized pathways has increased because of their many benefits: reducing crash risk, increasing safety and comfort, and encouraging more people to use bicycles as transportation.

Despite the growing demand for SBLs, current design guidance was incomplete. In a recent research project, U of M researchers filled gaps in SBL design guidance and provided engineers and policymakers with much-needed information for making critical decisions on bicycle infrastructure installations and improvements. The project was sponsored by the Minnesota Local Road Research Board and the Minnesota Department of Transportation.

“The results of this project provide substantial information that will help planners and designers to create the safest and most effective bicycle facilities in a wide range of urban contexts,” says Paul Oehme, City of Lakeville public works director and the project’s technical liaison.

The research team was led by John Hourdos, director of the U’s Minnesota Traffic Observatory. The team began by gathering, reviewing, and synthesizing existing SBL guidance to determine critical knowledge gaps. Next, the researchers conducted interviews to gather additional information: They interviewed planners and designers to learn about their challenges (particularly focusing on safety, comfort, and connectivity), transit drivers about their experiences and challenges with SBLs, and the leaders of bicycle advocacy organizations for their perspectives on bicycle users’ experience. Finally, they surveyed hundreds of Minnesota bicyclists to gather their perceptions of safety and comfort with different SBL designs and their input on winter riding and winter lane maintenance. 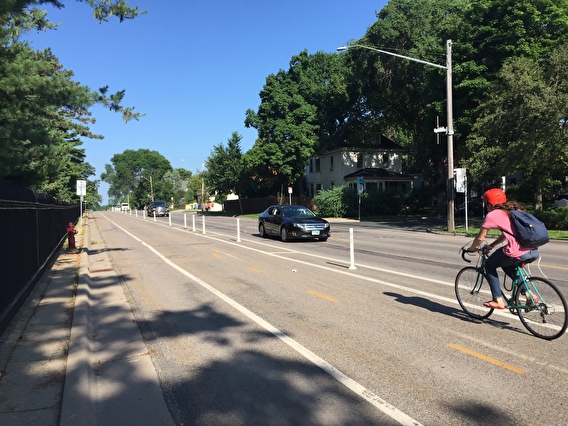 The project findings validated existing guidance that strongly emphasizes the SBL as the highest-quality bikeway facility available. “Our research confirmed that the majority of potential cyclists prefer design options that maximize separation from vehicles,” Hourdos says. “The implication is that designs that reduce risk by maximizing separation are also most likely to promote new demand: More cyclists lead to more new facilities.”

In addition, the bike user survey revealed important information about key differences among cyclists. “People who cycle are not a monolithic group,” says Greg Lindsey, a professor with the Humphrey School of Public Affairs and the project’s co-investigator. “Some are confident and fearless in traffic, but many others are interested but concerned. Designers should cater to these concerned riders whenever possible to foster greater demand, and keep in mind that people who cycle prefer to minimize interactions with traffic between their origin and destination.”

The bike user survey also shed light on the challenges of wintertime cycling. Icy roads were the most common reason for not riding in winter; ice was an even bigger concern than fresh, unpacked snow. Because people who cycle prefer to ride on clear and dry pavement, prioritizing lane clearance during winter could be the most important maintenance practice for increasing SBL use during the winter.

The report provides four “tradeoff matrixes” to help designers balance objectives and manage complex contexts when designing SBLs. The matrixes include separation buffer design, the design of mixing zones, tradeoffs related to combinations between barrier and mixing-zone designs, and the design of bus stops.

Ultimately, the project showed that SBL design is a highly local and context-specific infrastructure issue, and that there is no one best SBL design. “The need for separation is the guiding concept, but all else is context,” Lindsey says. “As designers brainstorm, they are making trade-offs among constraints while exercising the enormous flexibility that exists within the still-evolving design guidance for bicycle networks.”