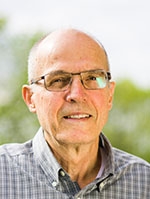 Dr. John S. Gulliver's primary research interests are in the areas of environmental fluid mechanics, chemical transport and fate in environmental systems, and flow and mass transport at hydraulic structures. Current research involves remediation of non-point source pollution from urban runoff. Specific research projects include the development of practices to remove dissolved contaminants from urban runoff, of improved infiltration rate measurements in infiltration practices, and the cost-effective mitigation of climate change impacts on stormwater systems. Gulliver has authored the Introduction to Chemical Transport in the Environment, coauthored Optimizing Stormwater Treatment Practices: A Handbook of Assessment and Maintenance, edited four books, and published over 140 refereed articles in these areas of research.

Gulliver is a professor emeritus in the Department of Civil, Environmental and Geo- Engineering and a resident fellow at the Institute on the Environment. He has taught courses in fluid mechanics, environmental mass transport, and urban hydrology and water quality.

Gulliver has been a CTS Faculty Scholar since 2007. He is one of the inventors of the SAFL Baffle, which turns a sump into an effective pre-treatment practice. Gulliver, his co-inventors, and members of the Technical Advisory Panel received the CTS Partnership Award in 2011 for their SAFL Baffle research. He, along with co-inventors, also developed the Modified Philip-Dunne Infiltrometer (used to assess infiltration rates) and the Iron Enhanced Sand Filter (used to retain phosphate from stormwater). Gulliver received the Rickey Medal in 2003 from the American Society of Civil Engineers, an award given for a career of research and education related to hydroelectric energy, and the Hunter T. Rouse Award and Lecture in 2020 from the American Society of Civil Engineers, recognizing outstanding contributions to hydraulics and waterways.