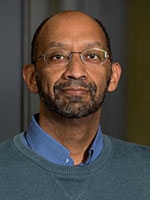 Demoz Gebre-Egziabher’s research focuses on positioning, navigation, and timing (PNT) with applications to aerospace vehicles and autonomous systems. He is a fellow of the Institute of Navigation (ION) and an associate fellow of the American Institute of Aeronautics and Astronautics.

From 1990 to 1996 he was a commissioned naval officer and served as a system engineer at the Naval Sea Systems Command (NAVSEA) Division of Naval Reactors in Washington D.C. He has been a faculty member in the Department of Aerospace Engineering & Mechanics since 2002.

Gebre-Egziabher holds a PhD in aeronautics and astronautics from Stanford University and is a registered professional mechanical engineer.