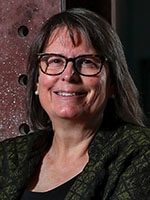 Catherine French's research interests include the behavior of reinforced and prestressed concrete structural systems, field monitoring of structures, numerical and experimental investigations of structural systems (including time-dependent and environmental effects), evaluation and repair of damaged structures, and development and application of new materials.

French, PE, DistMASCE, HonMACI, FPCI, is College of Science and Engineering Distinguished Professor and member of Academy of Distinguished Teachers at the University of Minnesota. She is the director of the Galambos Structural Engineering Laboratory and Multi-Axial Subassemblage Testing (MAST) Laboratory in the Department of Civil, Environmental, and Geo-Engineering.

French is a recipient of a number of awards, including the American Concrete Institute (ACI) Honorary Member, Joe Kelly Award, Henry L. Kennedy Award, ACI Reinforced Concrete Research Council Arthur J. Boase Award, and American Society of Civil Engineers (ASCE) Distinguished Member and Raymond C. Reese Research Prize, and Prestressed Concrete Institute (PCI) Fellow and Distinguished Educator Award. She is a past member of the ACI Board of Directors and numerous other ACI committees. She serves on the ACI 318 Structural Concrete Building Code Committee, for which she has been a member since 1995.