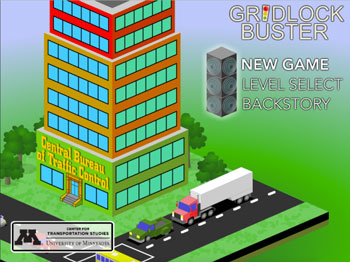 As a player, you will imagine you have just been hired by the Central Bureau of Traffic Control and handed your first assignment. You must work through a series of levels by controlling the traffic and ensuring that delays don't get out of hand—such as lines of backed-up traffic and frustrated drivers—in the simulated environment. Your traffic management “supervisor“ will guide you as you work toward greater challenges and responsibility. 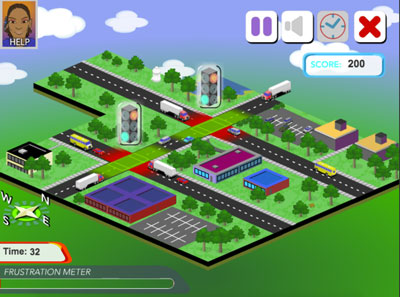 In the game, the more a car is delayed, the more “frustrated” it gets—causing the “frustration meter” to increase. And if there is a lot of traffic passing through an intersection, long lines of cars tend to form if those cars don’t get enough green time.

Actual traffic engineers call signal programming fixed-time control. As you’ve noticed in the game, fixed-time control must take into account the traffic patterns on a street: the heavier traffic is in a certain direction, the more green time it needs relative to the other traffic. Traffic engineers call this the split: the fraction of a cycle for which the signal is green for traffic going in one direction.

Gridock Buster was originally developed by the Intelligent Transportation Systems Institute at the University of Minnesota, with funding from the USDOT's University Transportation Center program. In 2016, the game was updated by CTS.