Established in 2002, the William K. Smith Distinguished Service Award is presented to a private sector professional in the freight transportation and supply chain area for their leadership in the field and their contributions to mentorship and education of future leaders. The award is named in honor of William K. Smith, who served on the initial committee to establish CTS and on many CTS research and education councils until his death in 2001. While Smith served for many years as a state and national leader at General Mills, he also taught classes in the Carlson School of Management and influenced many others with his passion for learning and teaching. 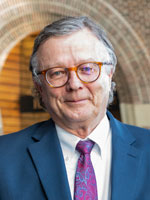 This year’s award is presented to Bruce Abbe, who stepped down as full-time president & CEO of the Midwest Shippers Association in 2019. He is now CEO of Abbe Communications and Management Services and serves on the executive committee of MnDOT’s Minnesota Freight Advisory Committee, representing the interests of agricultural shippers.

Ron Have, President of Freightmasters, Inc.