With the increasing availability of hybrid pickup trucks and SUVs, municipal fleet managers have more options when replacing or expanding their fleets. However, to justify new vehicle purchases, they must determine how their choices impact budgets and operations. In a recent study, U of M researchers used vehicle data to evaluate the potential real-world benefits of adding hybrid vehicles to municipal fleets. They found that hybrids offer significant fuel economy benefits for urban stop-and-go applications.

“Although municipal fleets are starting to implement hybrid electric vehicles, fuel cost savings are not always easy to determine, and public fleet managers have not had a method for weighing the fuel economy benefits of hybrid vehicles outside of manufacturers’ claims,” says Will Northrop, associate professor in the Department of Mechanical Engineering. “Our aim was to determine what routes and usages generated high fuel consumption in Minnesota municipal fleet activities, which vehicle technology delivered lower consumption on chosen routes, and the basic cost-effectiveness of technologies in specific uses.”

Researchers began the study by installing data loggers on half-ton pickups, three-quarter-ton pickups, and SUVs in a variety of Minnesota state and local fleet vehicles, then recording data from those vehicles for eight months. Next, they developed vehicle simulations based on logged data and manufacturer fuel consumption claims for conventional, hybrid gas-electric, and hybrid charge-depleting plug-in vehicles. Then, they validated the model using data collected from a hybrid gas-electric police department van and analyzed daily vehicle use using average speed, fuel consumption, and kinetic intensity.

“We used driving cycles that were realistic and ran a model that was not computationally intense,” Northrop says. One of the benefits of their approach was that unlike the standard, federally regulated fuel economy testing used by vehicle manufacturers, they were able to model hybrid performance based on actual vehicle use in Minnesota.

“Based on our findings, we recommend local fleet managers rely on conventionally powered vehicles for rural and highway routes but consider hybrids for urban routes or those with a lot of stop-and-go conditions,” Northrop says. “We also found that aggressive driving reduces fuel economy and should be avoided.”

These findings could help save substantial taxpayer dollars, as research shows that even a slight benefit in fuel economy saves on fuel costs while reducing emissions. For example, in Minnesota’s Dakota County, the municipal fleet consumes about $540,000 in fuel each year.

“This study gives fleet managers a tool for gauging the benefits of adding hybrids to our fleets,” says Kevin Schlangen, fleet manager for Dakota County. “Determining how the equipment will be used is key in the decision-making process.”

This project was sponsored by the Minnesota Local Road Research Board. 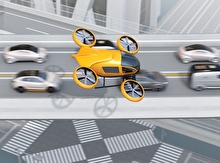 Looking to the future of aerial mobility: flying cars for public transportation