In recent years, many metropolitan-area highway systems have created high-occupancy toll (HOT) lanes. Typically, the use of these lanes is restricted during peak periods to carpools and those paying a toll for access, which commonly requires enrollment in an electronic tolling program and the use of an electronic transponder.

To better understand why drivers enroll in Minnesota’s MnPASS electronic tolling system, University of Minnesota researchers investigated the factors that drive subscriptions. Their findings indicate that households are more likely to have MnPASS subscriptions in areas where the MnPASS system provides a greater increase in accessibility to jobs.

“While there has been a great deal of research into what causes travelers to select a toll lane during a single trip, there is very little information available regarding the first decision a potential HOT lane user must make—the decision to enroll in an electronic tolling program and become an eligible HOT lane user,” says Andrew Owen, director of the U’s Accessibility Observatory.

The MnPASS system was created in 2005 with the opening of HOT lanes on I-394 west of downtown Minneapolis; in 2009, the system was expanded to include HOT lanes on I-35W south of downtown Minneapolis. During peak periods, the lanes are restricted to vehicles carrying two or more occupants and to travelers paying a toll that varies from $0.25 to $8.00 based on HOT lane utilization at the time. To use the HOT lanes, vehicles must enroll in the program online, by mail, or in person and pay $1.50 a month to carry a MnPASS transponder provided by the Minnesota Department of Transportation (MnDOT).

“Though enrolling in a HOT lane program is usually low-cost or free, it always requires some user expense in the form of time spent processing enrollment forms and managing accounts,” says Owen. “In addition, it involves some risk because there is typically a charge for lost or damaged transponders. Because of these costs and risks, it’s reasonable to expect people who would receive little or no benefit from the ability to use HOT lanes won’t enroll in the program, while a person who would receive a very large benefit would be very likely to enroll.”

To test this theory, researchers calculated the job accessibility benefit of the MnPASS system by determining the areas where using MnPASS HOT lanes would lead to the greatest increase of jobs reachable with a commute of 30 minutes or less. They found that the areas with the highest concentrations of MnPASS-holding households—the western and southern suburbs of the metro area—were also the areas where the MnPASS system provided the greatest accessibility benefit.

“These findings will serve as a useful tool for transportation planners as they work to determine where to implement HOT lanes in the future,” says Owen. “By evaluating the incremental job accessibility benefits created by a planned HOT lane, planners can more effectively model participation in toll lane programs and more accurately weigh the costs and benefits of creating new HOT lanes.” 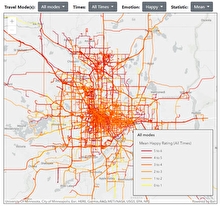