Using an innovative mobility app, U of M researchers are pointing the way for drivers to shift their travel toward more sustainable modes such as transit, park-and-ride, walking, and biking.

The research team began by adding new functions to the DaynamicaTM smartphone app to provide alternative mode recommendations for confirmed trips involving car travel. (Daynamica was developed by U of M researchers led by Fan, and Daynamica-related work has generated a US patent.) 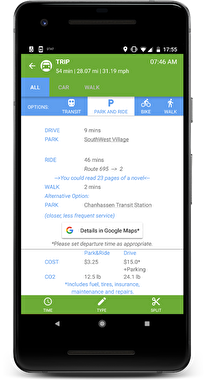 “For example, a car commuter with a 28-mile trip to campus might see a park-and-ride alternative showing that taking the specified transit route would allow them to save more than $10 in car costs, reduce their carbon footprint by more than 10 pounds of CO2 emissions per trip, and enable them to read 23 pages of a novel during their bus ride,” Fan says. “We are aiming to hit all three phases in the behavioral change process—awareness, motivation, and action.”

“We found that the transit and park-and-ride recommendations generally had a longer distance and duration than the actual car trips, which reflects a major accessibility gap between public transit and private car options in the Twin Cities region that needs to be addressed,” Fan says. “Trip recommendations with a shorter travel time than actual car trips were more likely to be considered reasonable, while the need to make frequent stops on a trip to work or depart before 7 a.m. made participants less likely to consider mode switching.”

The work was funded through the US Department of Transportation and the Twin Cities Metropolitan Council. 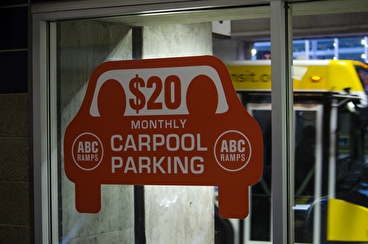 U of M researchers will continue their exploration of travel mode shifting with a new “Flexpass” project—a partnership with the Minnesota Department of Transportation (MnDOT) that allows commuters to bundle a limited-use parking pass with an unlimited-use transit pass at a reduced rate. The study start date was pushed back because of low commuting rates during the COVID-19 pandemic, but the project is expected to enroll participants beginning this summer when more downtown commuters return to on-site working.

“As the owner of ABC Parking Ramps, part of MnDOT’s goal is to reduce single-occupancy vehicle trips into downtown Minneapolis,” says Elliot McFadden, MnDOT’s Shared Mobility Program coordinator. “In the past, carpooling has been the primary tool to promote this goal. However, due to declines in carpooling’s popularity and the need for more flexible, market-tuned products, we are interested in exploring products like Flexpass.”

Study participants will receive a reduced-rate parking pass that allows parking at ABC Ramps in downtown Minneapolis for 10 or 14 days per month, along with an unlimited-use transit pass. They will also be asked to collect 14 days’ worth of data through the Daynamica app, which will be used by U of M researchers to gauge the program’s effectiveness.

“The use of Daynamica for this project gives us the potential to collect far more data far more efficiently than traditional travel logs,” McFadden says. “We can easily match trip data with trip purpose and push different survey questions to participants quickly as we adapt to real-world conditions.”

Project launches to identify restrooms along bike paths in Minnesota