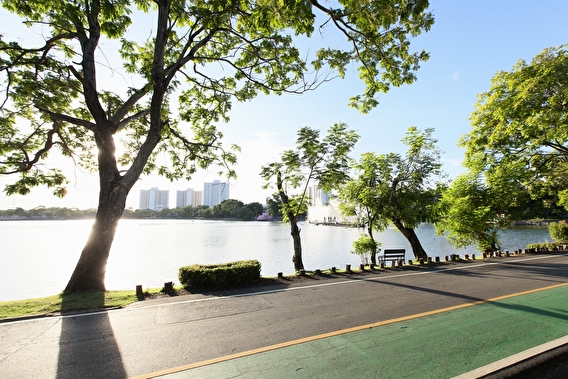 The adoption of autonomous vehicles in coming decades is expected to have a major impact on road design and urban infrastructure—and one of the largest changes could mean the end of the road for aging and costly stormwater systems.

“At the Minnesota Design Center, we’re looking at the design of road and infrastructure systems as a result of autonomous vehicles,” says Professor Tom Fisher, the center’s director. “We’ve found the precision of autonomous vehicles requires a different type of road surface that can resist precise, repetitive wear.”

As a result, future roads could be a set of reinforced concrete tracks that allow for much more pervious surface, require fewer materials, and are easier to maintain. And, Fisher says, “perhaps most importantly, they will allow us to eliminate the storm sewer system, which is very expensive for cities and local governments and creates many negative impacts.”

If roadways at every level—from alleyways to major arterials—shifted to the new design, Fisher says the hydrological impacts would be immediate. “Instead of moving stormwater offsite through a stormwater system, you have the ability to capture stormwater in the roadbed and allow it to recharge aquifers. We’re working to calculate the impacts of that in terms of hydrology, the elimination of heat islands, creating more space for animal habitat, and creating new bioswales.”

The shift to a reimagined urban infrastructure would come at a significant initial cost. However, Fisher says that while the immediate short-term cost is higher, there is enormous long-term savings potential in the elimination of stormwater systems, much lower material use for roadways, and fewer environmental impacts. To offset the initial costs, governments would need to leverage the increased tax base that comes from the shift to autonomous vehicles.

“There will be opportunities for new kinds of uses all along our infrastructure to help pay for this change,” Fisher says. “Autonomous vehicles require fewer and narrower lanes, which allow the right-of-way to be used for other things. Private garages could become businesses and affordable housing, alleyways could become privatized, and today’s parking infrastructure could be used for stormwater retention, pickup and drop-off, urban gardens, green spaces, and denser development to create a greater tax base.”

Beyond the benefits to local governments through the elimination of the stormwater systems and long-term cost savings, this reimagined infrastructure has the potential to make the urban landscape a better place for everyone who lives and works there.

“We see a future where city streets become narrower, greener, and quieter,” Fisher says. “The shift to autonomous vehicles will allow for more bike paths and wider sidewalks, and the ability of autonomous vehicles to operate safely around people using other transportation modes opens up the public right-of-way for many other kinds of uses.”

This work was supported by a National Science Foundation Smart & Connected Communities grant.