The Minnesota Department of Transportation sponsored the ABC Ramps Transportation Options Plan, an 18-month project to plan the future of the ABC Ramps in downtown Minneapolis. Project components were split among University of Minnesota researchers and several transportation consulting firms. The parking ramps, completed in 1992, are the ending point for I-394 and the high occupancy vehicle lanes, which connects Minneapolis to its western suburbs. The ramps were designed to reduce single occupant vehicles and ease congestion by encouraging carpooling and transit use but are now increasingly used by solo drivers and surrounded by congested streets. Ramp management needs to prepare for a future with changes in travel behavior, ride hailing, shared mobility, technological shifts, vehicle electrification, and, eventually, automated vehicles. What directions should policymakers take in light of these changes? The research team provided analysis and recommendations. 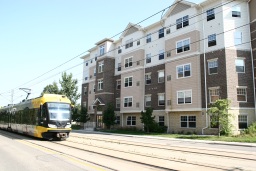 The Transitway Impacts Research Program answers questions about the economic, travel, and community impacts of transitway corridors in the Twin Cities metropolitan area. The program was launched in 2006 by the Hennepin County-University of Minnesota partnership and has grown to include a mix of funding partners and program supporters.

Spatial and Skills Mismatch of Unemployment and Job Vacancies

Disadvantaged urban workers often find themselves in a double bind. They may be qualified for many entry-level jobs, but have no way of reaching suburban employment centers; they may also be easily able to reach many jobs nearby, but lack the qualifications for them. These statements describe the interconnected problems of spatial mismatch and skills mismatch. This project studied the current state of spatial and skills mismatch in the Twin Cities region, as well as coordination between transit planning and workforce development and opportunities to improve that coordination.