Get lots of sleep—but not behind the wheel 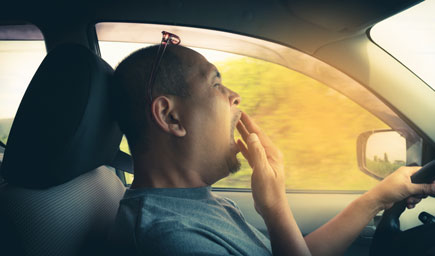 Many of us would never drive after drinking, but we’re not as hesitant about getting behind the wheel after being awake for too long or not getting enough sleep. It turns out that can be just as dangerous as driving while impaired by alcohol or drugs.

Unlike impairment, however, drowsy driving isn’t easily observable, and there are no tools to detect it. Because of such factors, it’s believed to be underreported and to have a much greater impact than we think.

To better understand and address the problems of drowsy driving, researchers at the U’s HumanFIRST Laboratory designed a study that aimed to find an objective test (or set of tests) that law enforcement officers could quickly and easily administer to identify fatigue during traffic stops. The Minnesota Department of Public Safety’s Office of Traffic Safety (OTS) helped secure two federal grants for the research team and provided guidance for the study’s design.

As part of the study, subjects stayed in the HumanFIRST research facility for 30 hours. They were not allowed any stimulants, and each subject was with a staff member at all times to help keep them awake. Every four hours, subjects participated in 30 minutes of driving and 30 minutes of fatigue assessment testing. During the other three hours, they played games, walked, and did other things to keep their minds and bodies active—they just weren’t allowed to sleep.

The driving took place in the HumanFIRST simulator, on a virtual stretch of I-35 between the Twin Cities and the Iowa border. Lab director Nichole Morris, the study’s principal investigator, said they kept it as boring as possible: “No crossroads, no traffic or buildings, a twilight sky.” Morris and her colleagues then watched to see whether the subjects were staying in their lane, obeying the speed limit, and staying on the road—and how these behaviors changed the longer the subjects were awake.

The fatigue assessment testing consisted of seven assessments that looked at the types of mental functions that might be affected by sleep deprivation. For example, participants would watch a screen and push a button as fast as they could when they spotted a circle. Another test involved responding only when they saw the letters P or Q and actively ignoring other letters. Generally, the more fatigued the subjects were, the worse they performed on the tests.

Some study findings were surprising to Morris and her team. For example, around the 26-hour mark, many participants reported visual illusions or hallucinations. Dr. Conrad Iber, a U of M professor of sleep medicine who worked on the study, said the illusions may have been dream activity.

Another surprise was how quickly fatigued drivers fell asleep at the wheel after they had just been walking around and feeling “refreshed.” At around 16 to 17 hours, perky participants would get into the driving simulator and fall asleep within five minutes. “The adage of ‘I feel sleepy, I’m going to go walk around and get some fresh air’ won’t save you,” Morris says. “No amount of walking around is a substitute for sleep.”

Overall, the project identified some promising possibilities for fatigue assessment tests, but there is more work to be done. For example, assessment results would need to be able to stand up in court, like breathalyzer and blood tests for drunk driving. But ultimately, this study is a step in the right direction to help make our roads safer.

(Adapted from a Minnesota Department of Public Safety blog post published in February 2020.)

Computing COVID-19: How location data could help track and control the spread