Autonomous vehicles (AVs) may trigger wide-ranging changes in public transit and parking systems in coming years. As part of a recent project, U of M researchers held in-depth discussions with planning practitioners from the Minneapolis–Saint Paul metropolitan area to learn what they think the biggest challenges and opportunities will be. While opinions differed about the specifics, all the participants agreed that AVs will have significant impacts for the region and believe corresponding planning policies need to be developed.

The research team, led by Assistant Professor Jason Cao of the Humphrey School of Public Affairs, began with a literature review of the general effects of AVs as well as those related to transit and parking.

They found that the expected influences of AV on transit are complicated: some researchers believe AVs would substantially decrease transit ridership, but others say AVs would attract riders by solving the first-mile, last-mile issue. Regarding parking, some researchers predict major decreases in demand—some even contend that the development of shared AVs will eliminate the need for parking entirely.

Based on these results, the team then organized two focus groups with representatives of different agencies and sub-regions of the metro area.

In the transit focus group, “almost all the participants agreed that AVs will decrease the cost and increase the efficiency of operating public transit, especially in suburban areas,” Cao says. Without drivers, service hours could be expanded. 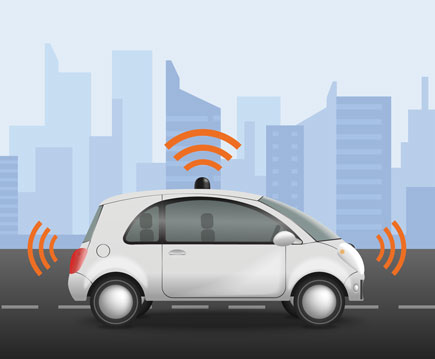 Participants acknowledged the potential of AVs to serve people with disabilities but noted that technology cannot easily replace certain roles of transit drivers. “Merely having the AV technology is far less than enough to provide a proper ADA service due to the lack of human caregiving,” Cao says. Other participants, however, pointed out that AVs could free drivers from their current driving tasks and allow them to focus on escorting and caregiving, which might be more beneficial to passengers.

Participants also noted how drivers provide a perception of safety and sense of community that cannot be offered easily by driverless transit. “So,” Cao says, “a tradeoff needs to be made between reducing numbers of drivers to decrease costs and maintaining the benefits of having human drivers.”

The most pressing transit issue identified by the transit focus group is the funding structure of transit, especially in Minnesota. If shared AVs become prevalent, the number of vehicles sold—and sales taxes—may decline, Cao says.

The parking focus group members differed on whether the demand for parking will decrease or increase. Most participants agreed that future demand depends on whether vehicles are owned or shared. If a vehicle is owned, it might be sent home or to a different location by its owner and return for pickups when needed. If a vehicle is shared, it would circulate among different users and only appear for pickups and drop-offs.

To cope with the potential increase in congestion, the focus group raised two possible solutions. The first one is imposing a congestion pricing mechanism that charges people when they send an empty car on the road. The other solution is to build peripheral parking near popular destinations but on lower-priced land.

Many participants of both groups said the perception of safety is essential and doubted whether people would be willing to give up control of the vehicle, Cao adds.

Other members of the research team were graduate student Xinyi Wu and co-investigator Frank Douma, director of the State and Local Policy Program. The project was funded by CTS.

CTS to build ecosystem for study of connected and automated vehicles