In recent years, new salt-tolerant turfgrass mixtures have been developed by University of Minnesota researchers in collaboration with the Minnesota Department of Transportation (MnDOT) and the Minnesota Local Road Research Board (LRRB). Unfortunately, these new mixtures did not succeed on roadsides as well as predicted, often because of watering practices.

Findings indicate that a non-permanent, programmable drip irrigation system using water from a fire hydrant was the ideal approach for watering roadside turfgrass. According to Watkins, this system uses less water than truck watering practices, can be reused, and results in better establishment.

At installations not located near a fire hydrant, the system can be converted to a gravity or other pressure-fed water supply. For sites where an irrigation system is not viable and water trucks are needed, researchers recommend using two specific nozzles for the best establishment.

As part of the project, the team also developed and added an entirely new section to its Roadside Turf website specifically to educate homeowners living near new turfgrass installations. The new information addresses common homeowner mistakes such as improper watering, mowing, fertilizing, and weed control. In addition, results from this and previous work were used to create an online course for contractors and other personnel who work on roadside turfgrass installations.

“We anticipate that this course will serve as an excellent continuing education opportunity for roadside turfgrass installers for years to come,” Watkins says.

The City of Edina Engineering Department received a grant through the LRRB’s Operational Research Assistance (OPERA) Program to adapt and test one of the temporary roadside turfgrass irrigation systems designed by U of M researchers.

The spark for the project was when Edina senior engineering technician Derek Northenscold shared his ideas for turfgrass irrigation at an LRRB meeting, where he connected with U of M turfgrass researcher Eric Watkins. Watkins described the University-developed drip irrigation system, which the Edina project team later assembled with parts readily available at most hardware retailers for less than $200. The system is expected to shorten watering time, reduce water use, and cut costs.

With last year’s wet fall, the city did not see a difference in turf establishment between test and control sections. “We are looking to test the system again this year,” Northenscold says. 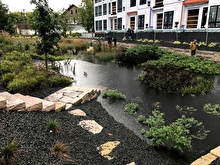 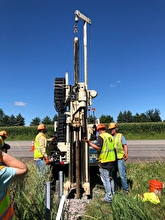