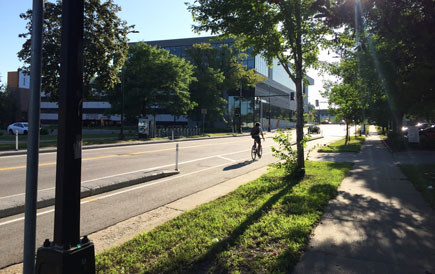 The crash risk for pedestrians and bicyclists is higher in Minneapolis neighborhoods that have lower household incomes and higher populations of minorities, according to U of M research. “In racially concentrated areas of poverty, predicted pedestrian and bicycle crashes are substantially higher than other areas of the city,” says Greg Lindsey, a professor with the Humphrey School of Public Affairs and the project’s principal investigator.

The case study, sponsored by the Roadway Safety Institute, aimed to illustrate how information about crash risk and equity can help transportation managers prioritize investments in street networks. Jason Cao, a professor in the Humphrey School, was the co-investigator.

“Traffic crashes disproportionately affect people in neighborhoods with lower incomes, Native American residents, and people walking and bicycling,” says Ethan Fawley, Vision Zero coordinator for the City of Minneapolis. “This research provides valuable data that can help us be proactive in improving traffic safety and equity.” Minneapolis recently adopted a Vision Zero Action Plan, which outlines key steps over the next three years to advance the city’s goal of ending traffic deaths and injuries on city streets by 2027.

In the project, researchers determined crash numbers and frequencies for pedestrian and bicycle crashes at intersections and mid-blocks in Minneapolis between 2005 and 2017. They then developed new models of pedestrian and bicycle crash risk and used them to predict crashes at all of the city’s intersections and mid-blocks. Next, they used statistical tests to assess how equitably the estimated crash risk is distributed in the city.

They found that people in Minneapolis who live in lower-income neighborhoods in which more than half the population is minority face higher crash risk than those individuals who live in more affluent, majority-white neighborhoods, especially at intersections. “The differences become even more pronounced when the central business district, which has the highest number of crashes, is excluded from the comparisons,” Lindsey says.

The team’s approach has distinct advantages over other models. First, it can estimate crash risk at sites regardless of whether crashes occurred there in the past. “We confirmed that crashes are distributed unevenly, and that crash risk is concentrated at a relatively small proportion of sites,” he says. Second, the approach incorporates measures of three transportation modes—vehicle, pedestrian, and bicycle—across an entire street network. 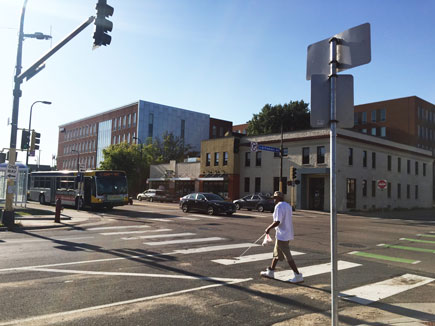 The models show that, in most cases, bike and pedestrian crash risks are higher—sometimes significantly—with more exposure to vehicles. The models also confirm that many different factors are associated with pedestrian and bicycle crashes, and that these factors differ for both modes at intersections and mid-blocks. For example, pedestrian intersection crashes are more likely in areas with a higher percentage of children nearby but less likely in neighborhoods with more elderly people. As a result, the researchers believe interventions and countermeasures should be separated out—and addressed simultaneously—to address the different risks of bicycling and walking.

The researchers then went on to develop new measures of crash risk. “We created two new indices and showed how they could complement or augment rankings currently used by the city to prioritize street improvement projects,” Lindsey says.

The results support efforts by the Minneapolis Department of Public Works to give more weight to equity and pedestrian and bicycle safety when it prioritizes street improvements. “If new criteria related to equity and active travel are used in project ranking, priorities for investment could change,” Lindsey says. “Our results provide additional evidence that the city can achieve its goals to increase pedestrian and bicycle safety.”