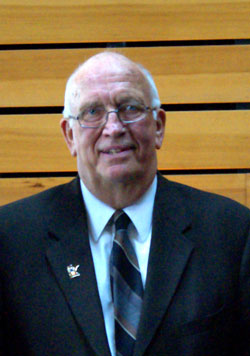 Eugene Skok, a leader in the pavement engineering profession, passed away on June 29. Skok was a civil engineer and former faculty member at the University of Minnesota. His pioneering research, under the supervision of Professor Miles Kersten, led to the development of an asphalt pavement design procedure for the state of Minnesota, parts of which are still in use today.

Skok was instrumental in the planning and construction of the MnROAD test facility in the early 1990s. His career included positions with several organizations, such as the Minnesota Department of Transportation, the Asphalt Institute, and the Minnesota Asphalt Paving Association.

Skok’s approachability and his willingness to invest time with others made him a great mentor to young pavement engineers and a model for established professionals. Skok influenced many in the field through his years of teaching at the University and in the two-year program for technicians in civil engineering at St. Paul College.

“I took one pavement design class from Gene in 1987, and he became a dear friend, mentor, and boss,” says Ann Johnson, president of Professional Engineering Services, Ltd. “Gene led by example and consistently demonstrated kind, thoughtful, and moral leadership for so many, including me.”

In 2016, the U’s Department of Civil, Environmental, and Geo- Engineering established the Eugene Skok Scholarship, funded through the proceeds of the National Road Research Alliance annual conference, to honor Skok’s contributions to the pavement community. The scholarship benefits undergraduate students studying at the University with an interest in pavement engineering.

(Adapted in part from CEGE News.)