Investments in biking routes improve access to jobs in US metros 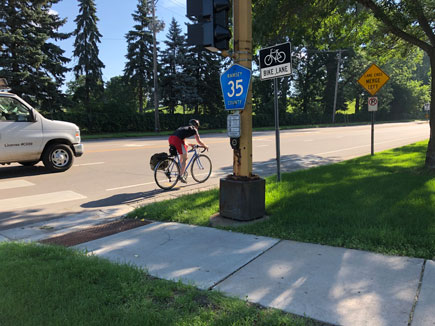 First-of-its-kind research from the Accessibility Observatory at the University of Minnesota ranks the 50 largest (by population) metropolitan areas in the United States for connecting workers with jobs via bicycle.

The new rankings in Access Across America: Biking 2017 are part of a national pooled-fund study that began in 2013 and focuses on accessibility. Accessibility, which examines both land use and transportation systems, measures how many destinations, such as jobs, can be reached in a given time.

“This new study provides a baseline to evaluate how well a metro area is facilitating access to jobs by bicycle from year to year,” said Andrew Owen, director of the Observatory. “Bike commuting is a cost-effective, healthy, and environmentally sustainable alternative to being stuck in traffic. State departments of transportation, metropolitan planning organizations, and local agencies can use our findings to better coordinate investments in bicycle facilities with the location of jobs and housing to improve job accessibility by bike.” 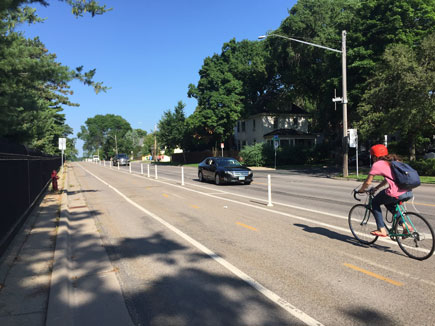 The study incorporates traffic stress and cycling comfort in its evaluation of access to destinations by bicycle. According to the study, low-stress routes are separated bike lanes and paths. Medium-stress routes include all bike infrastructure—low-stress facilities plus on-street unprotected bike lanes, certain shared lanes, and mixing with traffic on some non-arterial streets.

Minneapolis–Saint Paul performs the best nationally (followed by San Francisco and Portland) when comparing medium-stress bike access to the maximum-possible access—the access to jobs that would be experienced if every road felt as safe as an off-street path. Using medium-stress facilities, workers in the Twin Cities can reach nearly 78 percent of the jobs they could by biking on all streets.

“Our engagement with Minnesotans has taught us that people prioritize making local bicycle trips safer, more comfortable, and more convenient. This includes trips to and from places of employment,” says Jake Rueter, pedestrian and bicycle planner with the Minnesota Department of Transportation (MnDOT). “MnDOT will continue to implement its state and district bicycle plans to help improve our state’s health, environment, and economy through increased bicycling.”

Since 2010, the number of bicycle commuters nationwide has increased nearly 22 percent. “Though biking is used for less than one percent of commuting trips in the United States, biking infrastructure investments are much more cost-effective at providing access to jobs than infrastructure investments to support automobiles,” Owen said. “Ultimately, our findings give policymakers and planners more options to improve transportation performance goals related to congestion, reliability, and sustainability as well as increased access to jobs.”

The research is sponsored by the National Accessibility Evaluation Pooled-Fund Study, a multiyear effort led by MnDOT and supported by partners including the Federal Highway Administration and 12 additional state transportation departments.