For commercial truck drivers, finding a safe and legal place to rest isn’t as simple as stopping at a roadside motel. Along busy corridors, parked trucks may overflow onto the shoulders of rest area ramps and adjacent roads, creating safety concerns. If they continue driving, truckers may risk becoming dangerously fatigued or violating federal hours­-of­-service rules.

A project team including the Minnesota Department of Transportation (MnDOT), the University of Minnesota, and the American Transportation Research Institute has developed a system that can identify available truck parking spaces and communicate this information to drivers—helping them determine when and where to park and improving safety for them and other drivers. The team is the recipient of this year’s CTS Research Partnership Award, presented at the annual awards luncheon on April 20. 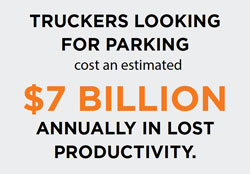 The Minnesota Truck Parking Availability System uses a network of digital cameras suspended above a parking area to monitor space availability. Image processing software developed by researchers at the Department of Computer Science and Engineering analyzes the video frames and determines the number of occupied spaces in all kinds of weather and lighting conditions.

With the system, there’s no need for manual recalibrations or other adjustments to ensure accuracy 24/7. “The system is the only completely non­intrusive monitoring solution in the country providing real­-time notifications to drivers,” says Professor Nikos Papanikolopoulos, the principal investigator.

“The benefit of it is that truckers will then be given information to better assess their trip,” says John Tompkins, freight project manager with MnDOT.

The project team installed the system at rest areas along Interstate 94 northwest of the Twin Cities as part of a demonstration project funded by MnDOT and the Federal Highway Administration. The first site was activated in January 2013.

Results of usability assessments show a clear impact on driver and carrier attitudes and perceptions. Sixty percent of drivers said the system helped them find parking during their trips; more than 30 percent said it helped them comply with hour-of-service regulations. And more than half of all users (drivers and operators) said the system had either positive or very positive impacts on their productivity.

Moving forward, a patent has been filed to commercialize the system. In addition, a joint effort by the Wisconsin and Minnesota DOTs is under way to implement the system between the states along the I-94 corridor for public-sponsored facilities.

“This information will be very helpful if [truckers] get drowsy when driving,” Tompkins says. “It also helps MnDOT be able to spread its truck parking capacity along the I-­94 corridor.”

December symposium will explore equity in the freight industry