The potential of telecommuting to alter travel patterns—and even mitigate congestion during peak hours—has sparked interest among transportation planners. Despite this potential, however, the actual impact of telecommuting on traffic has remained an open question.

“In practice, the relationships between telecommuting and travel behavior vary,” says Jason Cao, an associate professor with the Humphrey School of Public Affairs. “For example, an individual might replace a commute trip by working at home but make another non-work trip because of the time savings from not making the commute trip.” 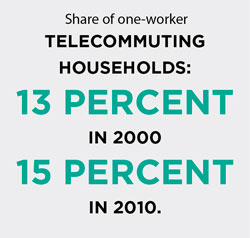 “This research has revealed the complexity of telecommuting patterns and the real differences in travel between occasional, regular, and daily telecommuters,” says Jonathan Ehrlich, planning analyst with the Metropolitan Council. “We need to be aware in planning how Internet and mobile technology both replace some and necessitate other travel.”

This research is part of a five-part report sponsored by the Metropolitan Council and the Minnesota Department of Transportation based on data produced by the council’s Travel Behavior Inventory household travel survey.

Additional components of the report examine how changing accessibility of destinations has affected travel behavior, changes in walking and biking, the effect of transit quality of service on people’s activity choices and time allocation, and transportation system changes.