In most US metropolitan areas, commuters have access to more jobs by driving than by taking transit in a given time. Transportation planners are beginning to use this difference in the number of jobs that can be reached—a gap known as the transit accessibility deficit—to explain differences in transit commute share among cities, thinking that more riders choose transit where it’s a more competitive option.

A study of the commute mode share in the Twin Cities, however, yielded surprising findings. Researchers expected the areas with a higher proportion of transit riders would be in places where the transit accessibility deficit was the smallest. Instead, they found the opposite was true.

“We found that the highest transit mode share occurs in the Twin Cities areas with the largest transit accessibility deficit relative to driving,” says Kristin Carlson, a former researcher with the U’s Accessibility Observatory and lead investigator for the project. “This suggests that people choose their commute mode independent of the overall comparative accessibility between driving and transit.”

The research was presented as part of the 2021 Transportation Research Board (TRB) annual meeting. Dr. Eric Lind, manager of research and analytics at Metro Transit, was a co-author of the TRB paper.

The researchers began their project by gathering accessibility data, determining how many Twin Cities jobs could be reached by car and by transit within 30 minutes. Next, they calculated the transit accessibility deficit: the difference in the number of jobs that can be reached by driving and by transit from a common starting place and time. Then, they gathered mode share data showing how many commuters choose to take a car versus transit. Finally, they modeled transit mode choice, incorporating the transit accessibility deficit and neighborhood characteristics.

According to the researchers, the difference relates to the concentric pattern of development around the Twin Cities urban core. From downtown, private vehicles can go faster and farther in any direction than transit vehicles in the same amount of time, and the peak difference in accessibility comes at the center of the city. Thus, the difference in total jobs available in 30 minutes is determined by access to suburban and outlying locations.

“We learned that being located in transit-rich areas provides the potential for the highest job accessibility by driving as well, by expanding the geography of access outward from the urban core,” says Carlson, now a data scientist with LexisNexis Risk Solutions.

Based on their findings, the research team recommends that transit agencies in areas with concentric development concentrate on serving the most competitive trips well, rather than competing for travelers in the outlying regions where transit is often inefficient. 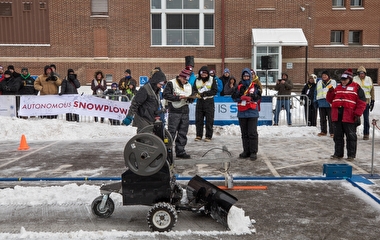 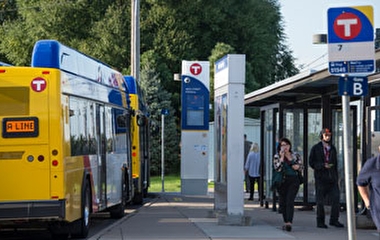 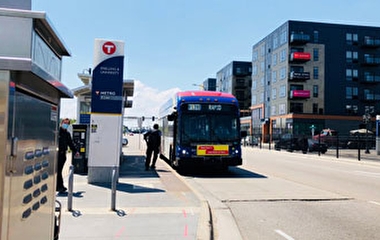