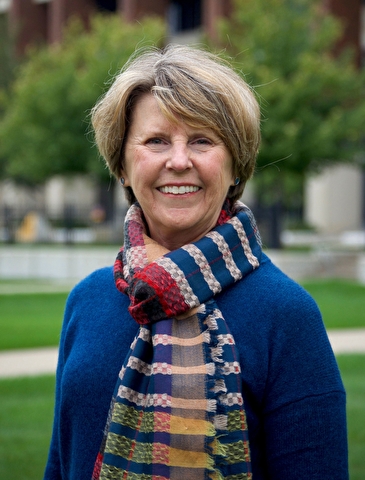 CTS director Laurie McGinnis is retiring after a distinguished career of leadership and innovation. Her last day will be January 15.

“For 10 years Laurie has nimbly led CTS, maintaining and building on its reputation for research excellence and delivering on the Center’s mission to improve transportation decision making in Minnesota and at a national level,” says Chris Cramer, the University of Minnesota’s vice president for research. “We thank her for her nearly 30 years of service to the Center and look forward to her continued engagement with the transportation research community.”

McGinnis joined CTS as research coordinator in 1991 and later served as director of research and contract management (1997–2001) and associate director (2001–2010). She helped establish key CTS programs, including the CTS Scholars Program, the Accessibility Observatory, and the Initiative on the Sharing Economy. Most recently, she helped launch the U’s Connected and Automated Vehicle (CAV) MnEcosystem now under development and is interested in continuing involvement with the new program.

Nationally, McGinnis has long been active with the Transportation Research Board, where she has served as chair of the Research and Education Section and the Conduct of Research Committee. In addition, she currently serves on the Governor’s Advisory Council for Connected and Automated Vehicles.

“This has been a dream job for me,” McGinnis says. “I have been blessed in so many ways serving as director of CTS.”

Laura Bloomberg, dean of the Humphrey School of Public Affairs, is chairing a search committee composed of CTS stakeholders both inside and outside the University:

“I expect significant local, regional, and national interest in the director position,” says Cramer, who has asked the search committee to forward finalists to him by early March. More information about the position is available on the CTS Job Openings page.