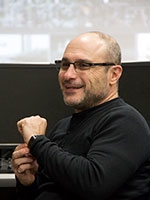 612-626-5492
hourd001@umn.edu
John Hourdos's research focuses on traffic simulation and model calibration, as well as traffic safety focusing on analysis and crash prevention. In collaboration with the ITS Institute, he developed the Minnesota Traffic Observatory, of which he has been the director since 2006. In 2003, he designed and deployed an array of advanced Traffic Detection and Surveillance Stations in the highest freeway accident area in the Twin Cities, forming the I-94 Field Lab for traffic safety research. This is an active laboratory that has been supporting state and federal projects. He also played a leading role in the evaluation of the Minnesota Zone Ramp Metering algorithm, research that received international attention within the transportation research community.