At this year's fall luncheon, Associate Professor Mary (Missy) Cummings of Duke University explored where we are in terms of the state of automation and autonomy in our everyday lives. She also discuss what the future likely holds and how to conceptualize the balance between humans and robots. In the transportation industry, for example, new technologies in the areas of autonomous vehicles and unmanned aerial vehicles are prompting ethical, social, and political discussions related to automation.

In addition, Cummings provided a brief overview of some of the research currently under way in her lab—the Humans and Autonomy Laboratory at Duke University. 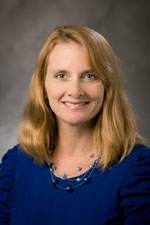 Mary (Missy) Cummings is an associate professor in the Duke University Pratt School of Engineering and the Duke Institute of Brain Sciences and is the director of the Humans and Autonomy Laboratory. Her research interests include human-unmanned vehicle interaction, human-autonomous system collaboration, human-systems engineering, public policy implications of unmanned vehicles, and the ethical and social impact of technology.